Oral implantology replaces the missing teeth with as many artificial titanium roots that in turn can support a single tooth (crown on implant), a group of close teeth (bridge on implants) or can be used to stabilize a total upper or lower prosthesis.
The natural teeth adjacent to the space to be filled therefore remain intact, are not prepared or, as they say, “filed”.

The most frequently asked question is "What material are the works made of?

Modern implants are made of titanium. That of the material is a very important factor, because everyone knows that when you insert into the body a foreign body may occur a process of organization from foreign body, or an immune reaction (antigen-antibody).

The latter, also called rejection reaction, occurs when proteins are present in the foreign body and, therefore, does not take place with implant materials in which proteins are absent. Titanium also does not even cause foreign body reactions, but establishes with the bone a direct connection that is the basis of “osteointegration”, biological process that makes implantology possible and predictable.

Theosteointegration is the process by which a screw placed in the bone and left to rest, that is, not subjected to load, for a period of about 3 months in the lower jaw and about 6 months in the upper jaw, integrates into the bone. This is an exceptional discovery made more than 40 years ago by the Swedish scientist Per-Ingvar Brånemark, orthopedic surgeon. Prof. Per- Ingvar Brånemark and his discovery refers to the whole of modern quality osteo-integrated implantology. Thanks to implants for more than 40 years, hundreds of thousands of patients around the world have regained safety, function and aesthetics.

How is the treatment performed with traditional techniques? 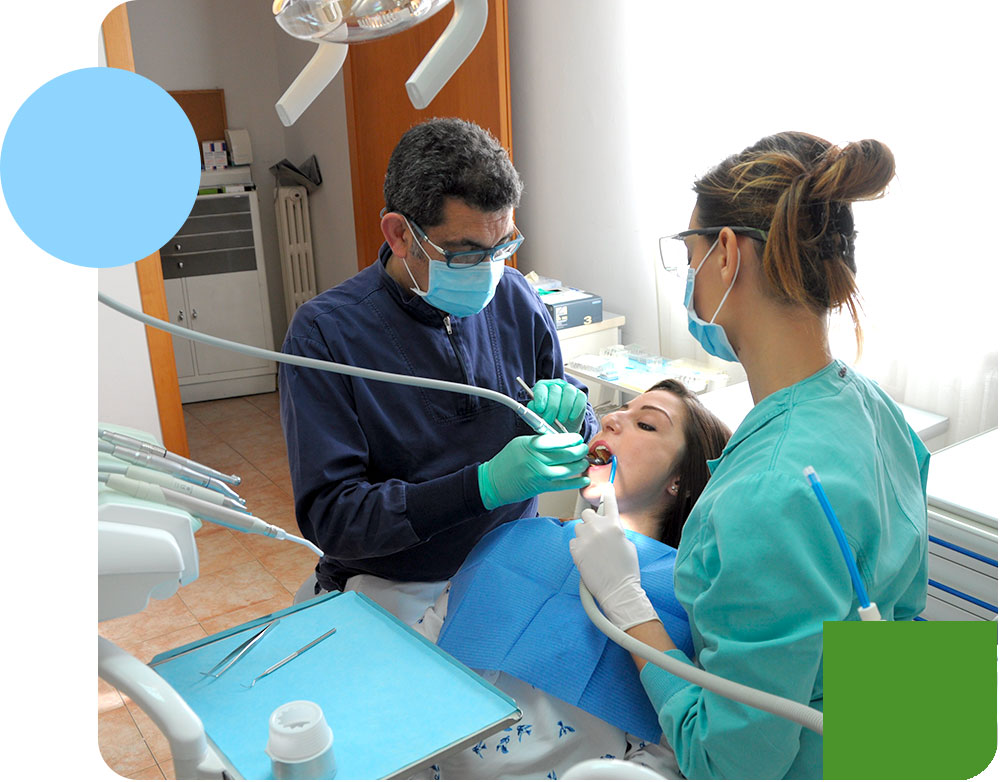 The intervention of dental implantology and then the insertion of an implant in the bone is a painless practice, is performed ambulatorily with the help of local anesthesia, the same that is used to perform a devitalization or dental extraction. After surgery, a minimal and short-term discomfort can be controlled with the usual anti-pain or anti-inflammatory drugs.

STEP 1 - Insertion of the dental implant into the bone

Under local anesthesia, the implant is inserted into the bone. In the vast majority of cases, the patient can wait for his normal occupations from the next day. Immediately after their insertion, the implants are covered by the gingiva and the process, called osteointegration, begins (the implant becomes one with the bone). This physiological process takes from 3 to 6 months. Meanwhile, a solution with temporary teeth is applied.

When the gums are healed, the final pillars are connected and new teeth are made on them, from a single tooth to an entire arch. Another frequently asked question is "Are dental implants okay for me?" Most adults can benefit from treatment with dental implants. The main limitation is the amount of bone available. Do not hesitate to ask us for an interview and we will be able to meet your question.

How is the treatment performed with computer techniques?

The implantology computer assisted is a system that differs from the always valid traditional implant techniques because much less invasive. It starts from the cd of the CT of the oral cavity that, once inserted in the computer, allows us to visualize ‘virtually’ the patient’s bone through a software that reconstructs three-dimensionally the parts on which to intervene.

In this way we are able to plan the position of the implants in an ‘ideal’ way with respect to the bone and the future prosthesis. The transition between what is displayed by the software and the patient’s surgery is short. Based on what has been planned ‘virtually’, we drill holes thanks to surgical guides that are built with the technique of rapid stereolithographic prototyping, by a company specialized in this field, based in Belgium. The request for these guides is made directly from the computer on which the surgery was planned, through an internet connection. The surgery is performed under simple local anesthesia.

In addition to less invasiveness, the therapy also guarantees drastically reduced surgical times and reduced costs. A significant advantage, from the patient’s point of view, is the rapidity of the surgery, which ends in the day with the delivery of the fixed prosthesis. The costs for the patient, thanks to the speed of the entire process, are also comparable to those of a conventional implant.

This system is highly innovative and, by reducing surgical invasiveness, has totally changed the scenario of implantology.

In our study we use the tecnica Nobel Guide , which uses the Nobel Clinical Program and the Nobel Scanner Procera.

The most frequently used prosthetic-implant solution is the All-on-4. A technique that, refined over the years and the numerous interventions since 2005, allows the rehabilitation of the patient in case of total edentulism (total lack of teeth) or other situations in which the teeth are now compromised. All this happens thanks to the insertion of 4 implants in the front of the jaw or jaw. The immediate loading of fixed prostheses completely and immediately rehabilitate the functionality and aesthetics of the teeth. This technique was developed in the 1990s by Dr. Paulo Malò in collaboration with the Nobel Biocare.

In our study we use the Nobel Guide technique that uses the Nobel Clinical Program and the Nobel Scanner Procera. 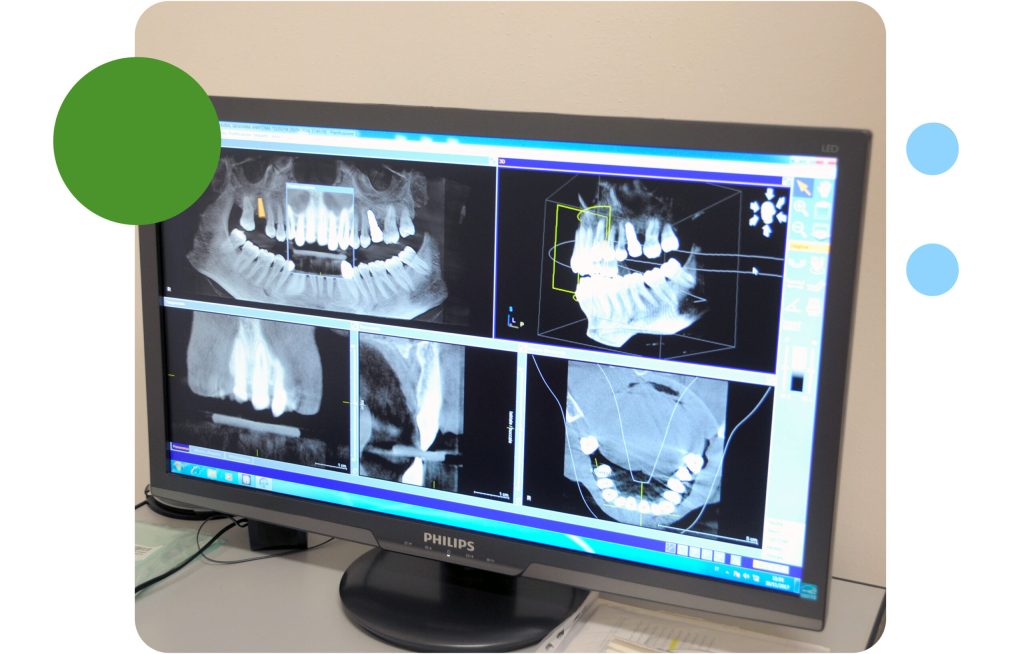 Surgery is performed under local anesthesia, so it is painless. With new surgical techniques, even after surgery, pain is generally absent or easily controlled.

2Everyone can put on plants and at what age?

As a rule, all adults can receive a dental implant. The only limitation is the quantity and quality of the bone. For this reason, each situation must be assessed on a case-by-case basis. For adults there are no age limits for implantology, if there are general conditions of good health, while for boys the skeletal maturation is expected which is roughly 18-20 years in males and 16-18 years in females.

3Teeth on plants will look natural?

With the latest generation and quality dental implants, aesthetics are highly regarded. On the implants are screwed "custom" pillars that follow the gingival trend and facilitate the technician’s task to build a prosthesis as natural as possible.

4Will the implants be difficult to clean? What kind of hygiene will I have to perform?

The type of home hygiene is the same as on natural teeth, bridges or dentures remove them. Brush and floss are used as recommended by the hygienist. It is advisable to carry out periodic checks every 4/6 months.

5Do plants always integrate? Are they always successful? Is there no rejection?

There are many types of implant systems, but only a few are able to give adequate clinical and scientific documentation supported by years of research confirming the safety and reliability. The implant systems we use (Nobel Biocare ) are among the most reliable and safe, they have 30 years of clinical experience and hundreds of thousands of patients treated with success rates over 95%.

6Can I chew as hard as I chew with natural teeth?

Of course. The chewing efficiency of new teeth is equal to that of natural teeth.

7What is the size and material of an installation?

The diameter can vary from 3.3 to 5.5 mm and the length from 7 to 20 mm depending on the anatomical situation. The material of which the implant is made is the so-called commercially pure titanium Titanium is a natural element, very widespread in nature and extremely tolerated by the body (biocompatible) and widely used in many branches of medicine (e.g. orthopaedic prostheses).